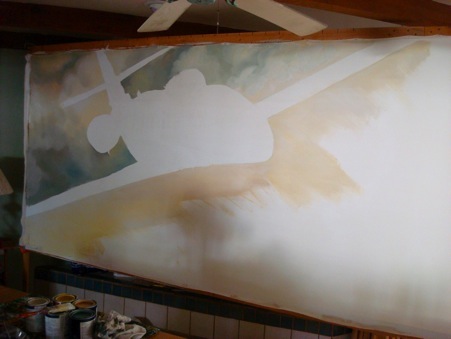 This mural, started Feb 18th 2008 presented some logistical problems.  The mural measures 12’x5’2”, small by most of my murals standards, but it is in an awkward place, about 4’ from the ground on a wall that had quite a bit of texture, had a large built-in counter in front of it, and had several computers for flight planning on the counters.  Most flight planning is done before noon, so I couldn’t start my days till noon and would need to work into the night.  I’m a morning person, so that didn’t set well with me.  And I would still have to deal with the computers in my way.

My solution was to do something I’d never done before, to paint the mural in my studio on stretched canvas.  Some old quilt frames, with extensions to make two of them longer served well for the support frame.   Now I haven’t stretched and gessoed canvas since my college days.   NOTE TO SELF:  Canvas Shrinks when gessoed!  Especially 12 feet of canvas!!!   Luckily, I had allowed a foot on either side and about 8” in length which I had planned to put behind the counter when mounting.   NOW I HAD BARELY ENOUGH!  I will have to be very careful during the installation.

Once stretched, the plane was sketched.   Now I must say here that this plane needed to be EXACT since most pilots I know are perfectionist engineer-types when it comes to technical stuff.  That’s a good thing if one is a pilot. (My Dad and brother and an old boyfriend come to mind) so I’m going to fess up and tell the world I projected this image onto the canvas to get the major lines and elements.  (get over it)  Now this was an extremely handy-dandy and not before thought of extra benefit of not doing the mural onsite.  In the area I was in, I would have not been able to get back far enough to project such a large subject.  I shiver to think what one of the viewers would think had there been some little doo-hicky missing or misplaced.   brrrrr.

I’d originally planned to bring the canvas to the site for final approval of the sketch, but saw this would be a logistical nightmare to try to unhook the canvas from it’s frame and haul it there.   I just LOVE my digital camera and this handy dandy computer…I just shot my client an image and all was well.

The first thing I painted was the stormy sky. 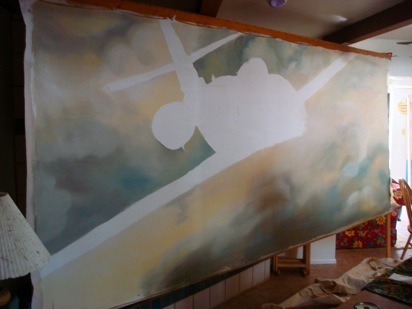 The sky in my resource was okay, but I needed to goose up the value (darks and lights) in areas to even out the composition and account for the very wide canvas.  Also, the walls and the well thought out decor at the airport had very specific colors, so I matched the colors and incorporated them into the painting.

Clouds are not something I have a lot of experience in…but these turned out pretty fantastic if I may say. I will later fixed the bottom dark clouds in the image to the right.  Wow, I got a lot done in a day!  This mural is pretty fun, and when they are, my hands and arms just S M O K E ! 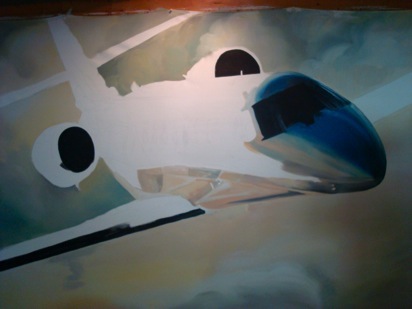 This is the day of intense consentration.  The details in the reflections must be precise or they will not work.  On cloudy days, reflection is awesome on metal.  To capture it, to make the metal turn and feel solid and believable, the pieces must do a combination of being like little puzzle pieces, sometimes with sharp edges and sometimes with a blur into the next shape.  And then there’s the shapes within the shapes.

I turned my ipod to some light classical music, mostly guitar, then some mellow Santana, put up a do not disturb sign and went into my “zone”.  Sometimes I find myself barely breathing.   I paint some, then walk back to check porportions and color, then paint more.  I have to wear my “old lady” glasses because my face is about 8” from the canvas and my source.  I know what I’m doing, so my hands paint fast and sure with very little correction.    Had to make a paint store run because the blue on the nose is more intense than anything on my palette or in my huge stock.   I also used 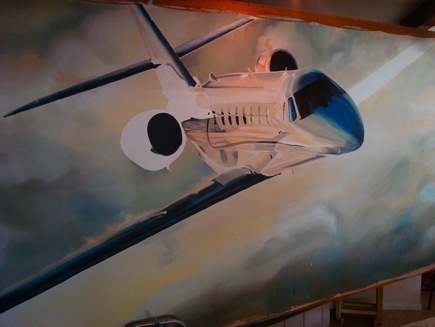 it in the wings, and as a glaze in the clouds and other places.  Oh by the way, speaking of glazes, the paint I used is HOUSE PAINT!  Your’e probably thinking ack!  House paint on canvas?   Oh yeah.   This isn’t just any house paint.  It is Sherwin Williams Superpaint.  It’s the best housepaint money can buy.  It has a high resin count and is extreemly durable for murals.  If I used acrylic or oil paints on my murals, they would be destroyed by people touching them and all of the other abuse people do to them.  The paint I use is flexible, mold, mildew and bug resistant, extreemly colorfast, especially if I put a couple coats of varnish over them and most important, will withstand what people do to them….touch it, no prob.  Scribble on it? 409 it off!  I even had a mural that I had varnished with 2 coats withstand a housefire (smoke damage, and quite a bit of heat, not flames).  It was cleaned, and still stands today and doesnt even stink like fire!  Anyway, yeah.  House paint.   This is the first time I’ve used it on canvas, but my paint gurus at Arizona Art Supply (I love those guys!) told me it goes on canvas just fine.   Of course we shall see when I go to unmount the canvas from the frame and install it.        ALL DONE WITH DAY 2.   GOT SHIN SPLINTS FROM STANDING SO MUCH TODAY.   OOWIE.  VIVA LA MOTRIN.

Today was the easy day, and fun too!  I finished a few details on the fuselage, the wing, the engine and part of the tail.  I like the part where the water vapor comes off the wings…it makes it look like the plane is flying rather than just hanging in space.  I tried something new today.  On another piece I’m working on, some fine art experimenting, I wanted to do an underpainting of a metalic paint.  I got this stuff you mix with whatever color of paint you want, and supposedly it makes it look like metal.  I read on the jar that it can also be applied over colors.   The white sunglow by the windows, and the white reflection under the wings and rest of the plane just were not intense enough.  Hmmmm….I wonder if this stuff will work?  That’s the nice thing about paint is if it sucks, you can always paint over it.  Not the case here!  This piece will be hung in a rather warm, low light.  That’s when the white irridecent glaze really pops!  It gave the plane tons of dimension!   Im liking this stuff.

Anyway, I went over all of my little drips, checked a few details and called it done!  I’m going to miss having this in my studio, it looks pretty cool there.   Tomorrow is the big installation day!  Before I take it off the frame tomorrow, I will photograph it again inside in morning light, then again outside.  This might make a cool giclee.  We’ll see.