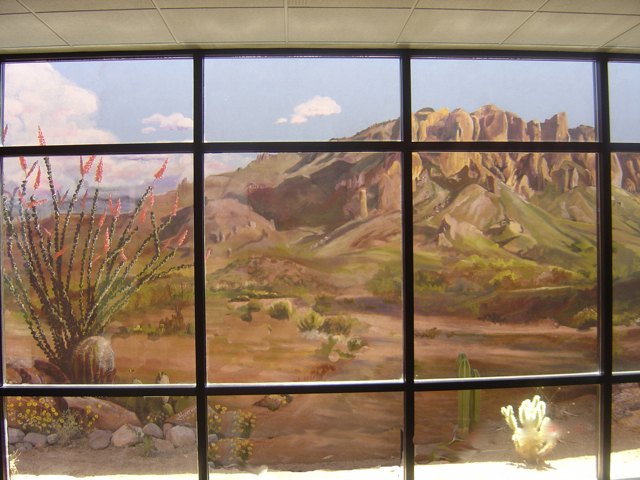 THIS IS THE LEFT SIDE OF THE MURAL.  Scroll down for the right side.  There were also other elements of the mural on the side walls and such.  Someday, I’ll figure out how to just post a movie of the murals I do so you can see the whole thing at once!  Till then….here’s some shots of the parts.

Julie in the middle of painting the MCH

This was my second major landscape painting.  It is a diorama, viewed from the inside in Centennial Hall’s gallery, but located outside.  Cactus and desert dirt were brought in for the foreground to blend with the mural.  (unfortunately, that little long green cactus seen in the finished shots above and below,  within a year had grown nearly as tall as the mural! Cuts the composition right in half! Time to whip out my handy-dandy machete and whack it down!  Just kidding, we’ll transplant) 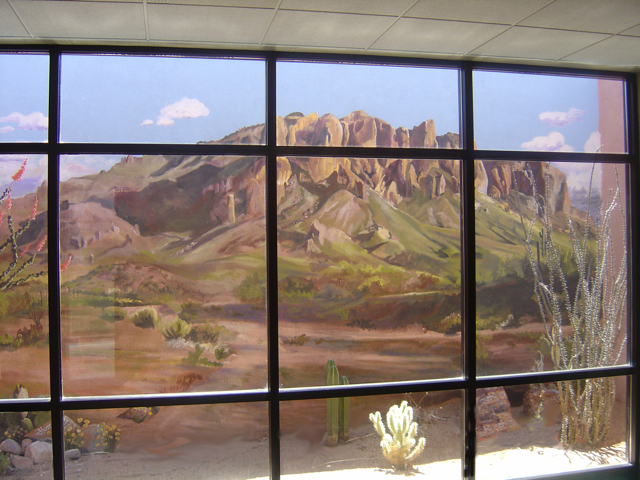 Right side of the diorama.  I really liked doing the long spiky cactus on the right.  Some of it is real, and some is in the painting.  Helps make the painting meld with the foreground.  The sand on the bottom, when this was originally painted was the same color as the sand in the painting, but changed colors as it was exposed to the elements.  These pics were taken about 6 months after completion.  One of these days, I will go back and correct it if they want. 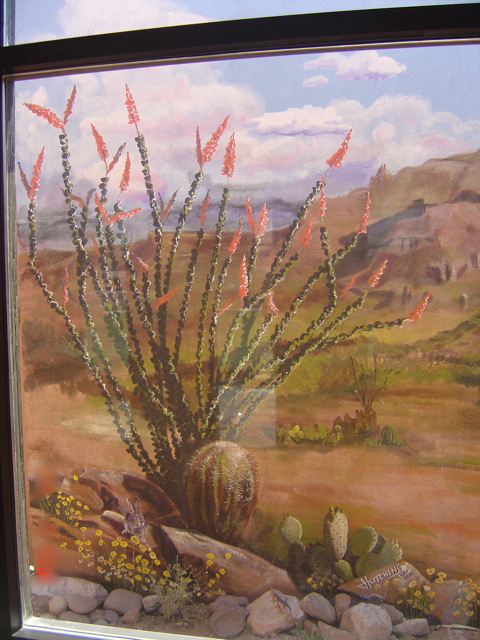 I liked this  little part of the mural a lot.  Lots of fun to do.  I went out to the mountains where I took the original resource pic for the diorama and gathered some rocks and seeds for these little yellow flowers.  I took pics of the flowers and painted them in and let the seeds grow in the real rocks in front of the mural.  Note my signature on the (painted) rock on the right.  Kinda tacky, like graffiti, huh?  I wrote under my signature in very small letters “was here”.  Haha very funny.  Also on one of the real rocks in the center of the image I painted a little lizard on the rock.  There’s LOTS of little things in this mural (and most of my murals for that matter) that one can only see if you look very close.