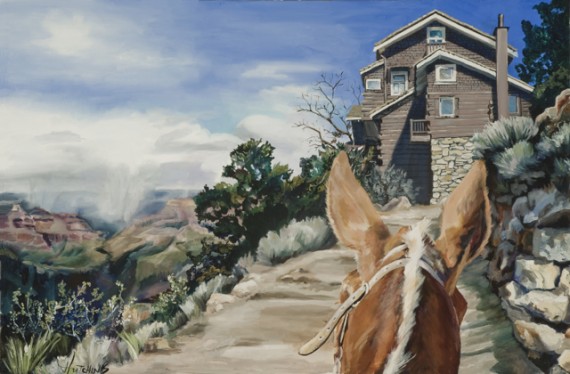 The idea for the title of this painting came from one of the mule wranglers at the Canyon who were helping me get reference photos for this painting.  One of them casually said “ya know, I’ve seen more beauty from between the ears of these mules than most people see in TEN lifetimes!  An idea was born!              Prints are available 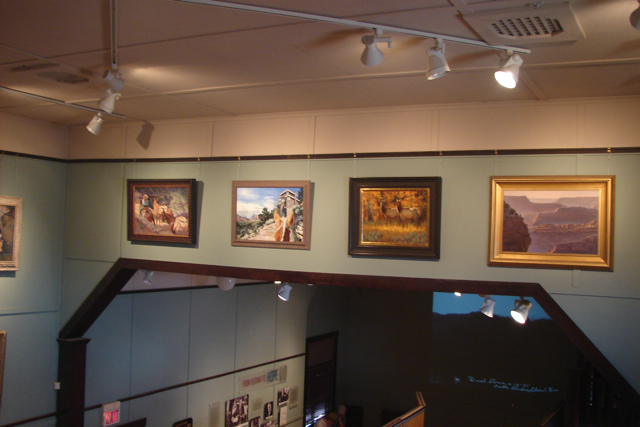 UPDATE Nov.2010:  After being on tour for a year, this painting came back to the Kolb Studio and is now hung in the residence area of the studio above Emory’s desk in the parlor!  From what I understand, there it will stay.  Here is a pic of the painting in it’s new home with the Kolb Brothers posing approvingly! (actually, it’s a cardboard cutout of the boys…hehaha…kinda fuzzy but kinda cute) 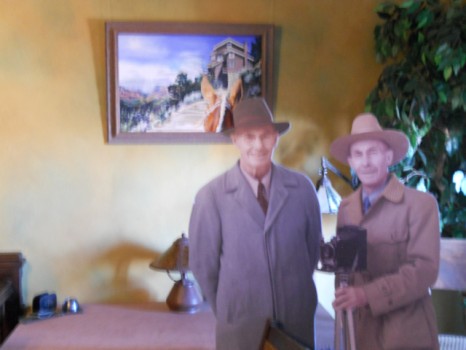 As for Kolb Studio…it has a GREAT story behind it.  It’s kind of a long one, so I’ll decrease the font and you get comfortable…

Many years ago, near the turn of the last century (1900’s) the South Rim of the canyon was just being developed.  An adventurer named Elsworth Kolb came upon the canyon and called his brother Emory back east, a photographer, and told him he’d better get out here with his cameras.  Emory came by train, stopped for a while in Williams to buy up an old photography studio, emptied it’s contents and came up to the canyon with the equipment to set himself up a studio.  He did this, but the other businesses and the Nat’l Park people told him he couldn’t do this (hogging the tourist $ I suppose).  That didn’t set well with the Kolb Brothers.  A buddy of theirs had a mining claim at the top of the what is now the Bright Angel Trail and told them they could set up their tents there and take pictures of the tourists as they came up on the mules, which they did and much to the chagrin of the Park Services and others, they were very successful!  The “powers that be” tried every trick in the book to run off the Kolb Brothers to no avail.  Emory married, had a little girl and raised his family there at the top of the trail.  The tents gave way to a shack, which gave way to the more sturdy home and studio you see in this painting.  Emory used to stick his head and camera out of the window next to the porch in the center of the building and take his photographs as the tourists were starting their descent, and by the time they came up had the finished photographs for them to buy.  Elsworth and Emory also were great adventurers, and were amongst the first to run the Colorado River at the bottom of the canyon. They were the first to make a movie of the river runnings, and they built in the studio, a large movie theater to show the tourists!

Meanwhile, the Park Services and the other concession people were furious!  They tried every trick in the book to run this family off!  Among them was to make the Coulter Studio and situate it just above the Kolb studio to physically hide it from the tourists.  The Kolb boys printed flyers and gave them out to people getting off the train with instructions on how to get to their studio…fixed that problem.

Soon, time went on…Mrs. Kolb died, their daughter moved on, and Ellsworth went on to other grand adventures.  Emory was old and alone, but with a very successful business still, and lots of “good ole’ boys” for friends, politicians and the such that helped keep the Park Service at bay.  The park service though came up and offered Emory to buy the studio, and he could stay there the rest of his days and do his business in peace.  Of course they offered a very paltry amount and gave him no guarantees they wouldn’t raze the building when he died.  He refused.  They came back with a more financially appropriate offer, but they still had plans to destroy his studio when he died, so he refused.

As luck would have it though, the federal government was enacting a historic building law.  His building would be federally protected, but the catch was it had to be 75 years old.  It already was historically and/or architecturally significant.  he just had to live for it to reach that magic 75 years.  Well of course he did, just barely!

The building couldn’t be wrecked.  The park service left the building abandoned and let it fall into disrepair.  Then the Grand Canyon Association, the non-profit that promotes the arts at the canyon, bought the building and fixed up the top floor and opened a bookstore in it.  The proceeds from the bookstore were used to further fix the building to it’s old glory!  The old theater was turned into an art gallery, and tours are given of the residences of the Kolbs.  If you get up to the canyon, you MUST take that tour!  It’s at 3pm every day and you have to sign up beforehand for it.