I LOVE MY JOB! Especially working on this mural. It’s at the flight school by the Prescott Airport.  First, of course, I “had”to go flying to take the references I needed to get the correct angles and features and people requested. But the first time out, I was in the back seat and it was really hard to photograph between the pilot and co-pilot. So a couple of days later I got to go up again in a really slick plane and sit in the front. We had a blast buzzing Granite Mountain and all over Prescott. I even buzzed my house and my Doctor’s house on the top of a hill where I’d recently completed a bunch of murals.  I learned tons more about airplanes, especially vintage ones like the Waco in the mural . Learned how the comtrails work and how to imply a spinning propeller. A fun thing was to try to get all those planes, including the one the student/teacher were in, going at altitudes and directions so to not crash into each other. Hopefully.

The unveiling was done at the 90th aniversary celebration and airshow. Ive never been to an airshow so that was pretty cool. And I get paid for this!?  Such a thing! 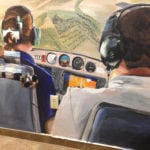 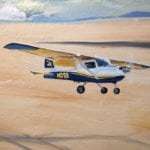 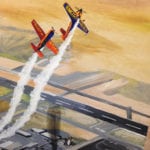 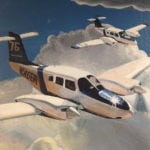 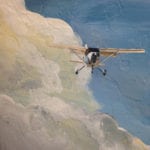 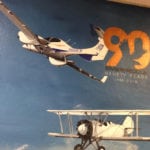 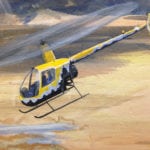 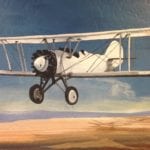 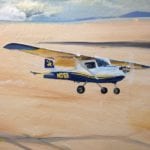 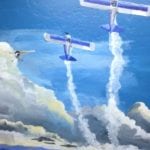 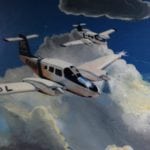