I had the great honor of painting 7 murals depicting our history in Prescott in the building directly across the main entrance of the Courthouse. This building was thoughtfully restored by Cliff Petrovsky to be as much like it was back before the Great Depression. As a kid, the building was always Penneys and Woolworths, with, a big weird cover over the fabulous windows that look out over the Plaza. The 7 murals are on the long forgotten (60years!) third floor. It was made into a ballroom and gathering place.  Also in this building on the main floor is a stage Cliff made. I have also painted that, with one more part which I just want to do that I believe will complete it. There will also be other murals later down the line.  For now, the 7 murals:

#1, is of the original owners of the building, Levi Burmister and Robert Bashford. The challenge on this is the images I had to work with wer old black and whites. I wanted the boys to spook people so tried to make their eyes follow you as you walked by. It didnt work with Robert because the source i had for him wasnt condusive to the effect, but Levi’s image was, but with a twist. His whole face moves with you. A fitting tribute to this ghostly building. 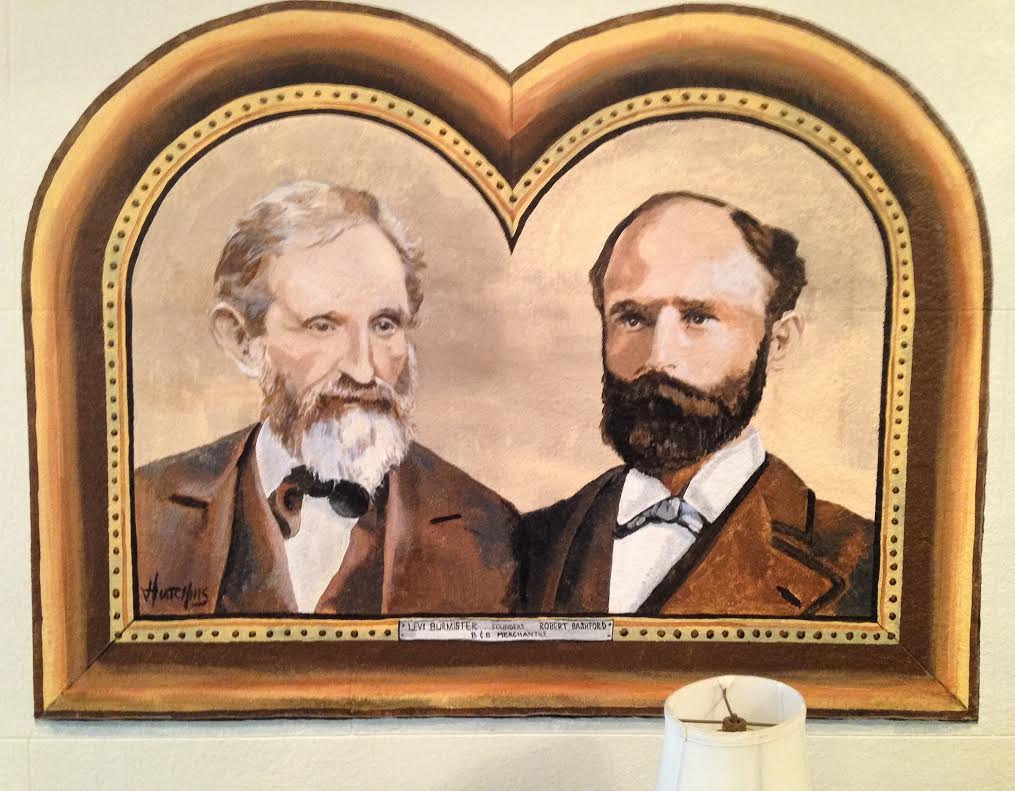 #2 is of the Great Fire of 1900. Now theres really no way of making a painting of the aftermath of a fire pretty or uplifting, so I painted the fire yes, but then I “framed” it with the bricks from the wall downstairs. Prescott bricks. So when people see it, they comment on how cool the bricks are. Whatever.

#3 draws inspiration  from a little black and white pano from the 1890’s. Its of Prescott’s second courthouse and the  square. I had to find a few of the grainy images of the courthouse to figure out its architecture, but Im pretty sure I got it right. I believe this is the most accurate depiction of the courthouse there is now.  Since painting this, I’ve found 2 other artists who drew inspiration from that little pano. One hangs a few doors down at the Prescott Station resturant and the other in the Wells Fargo bank at Frontier villiage. Its cool to see how very different they all are.

#4 is of the third and current courthouse and the streetcar that ran up and down Prescott. It’s from the 1940’s. The handsome silverhaired gent in the streetcar is Cliff. And the folks behind him are Cliff’s wife Ann, my brother Bill, me and my little grandaughter Avaleigh and the couple are my parents, Gene and Barbara Hutchins as they were in the 1940’s.  Hey, might as well use folks we know to people these! This was cool to paint because the scene is right outside the window it’s next to, except through a time machine of course. 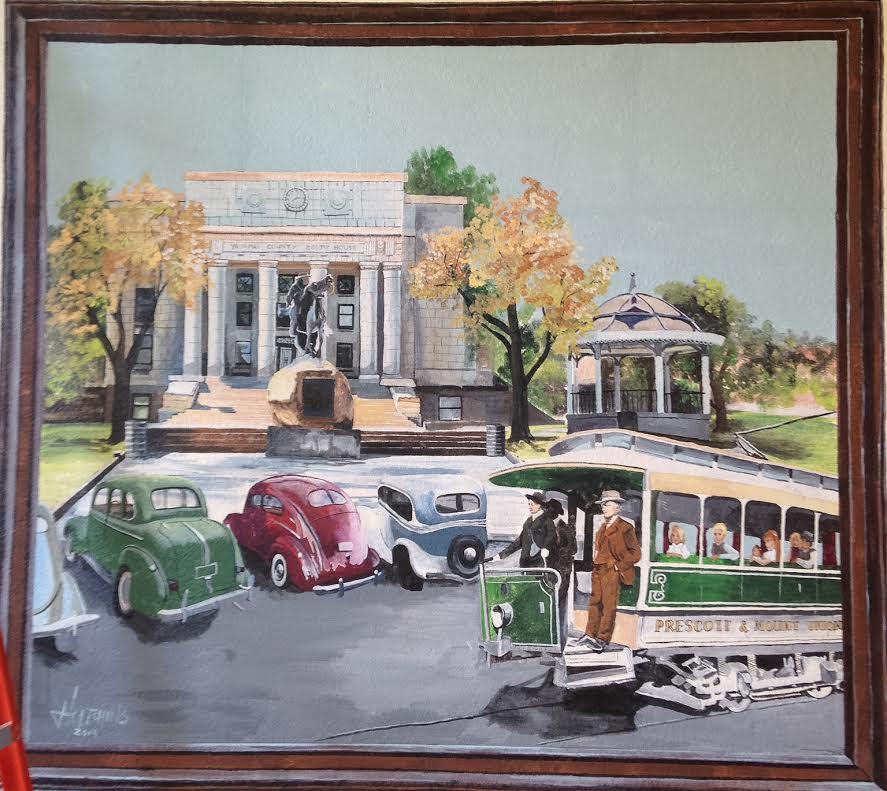 #5, on the other side of the room was a blast and a challenge to do. I had to go meet all the Prescott rodeo folks and get permissions for copyrighted stuff. They helped me big time by giving me access to amazing photos of bygone rodeos. Cliff wanted one from way back in the day so I chose the 1920’s to depict. Quite different from today’s fancy rodeos. Even the bull was just a bull, not the giant beasts ridden in modern rodeos. This was one of my faves to do. 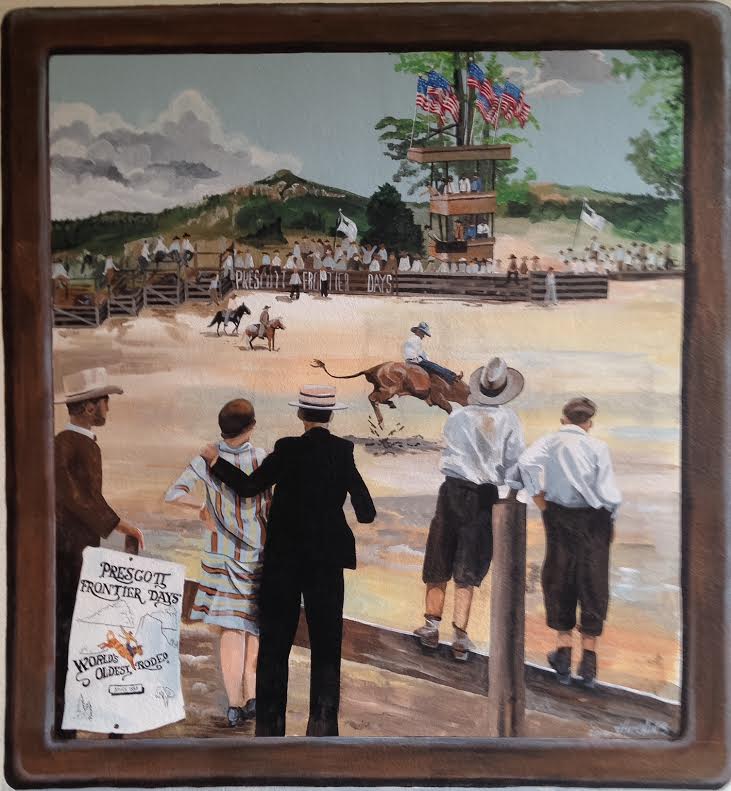 #6 was a weird one to paint. We wanted to show Prescott’s first 4th of July parades and what early parade was complete without “The Horribles”?  These guys were prominent businessmen of the day, Levi and Robert of B&B Merchantile (this bldg’s original name) were amongst them.  They dressed up in horrible costumes and played in their horrible marching band playing horrible tricks on paradegoers along the way. They were just Horrible! 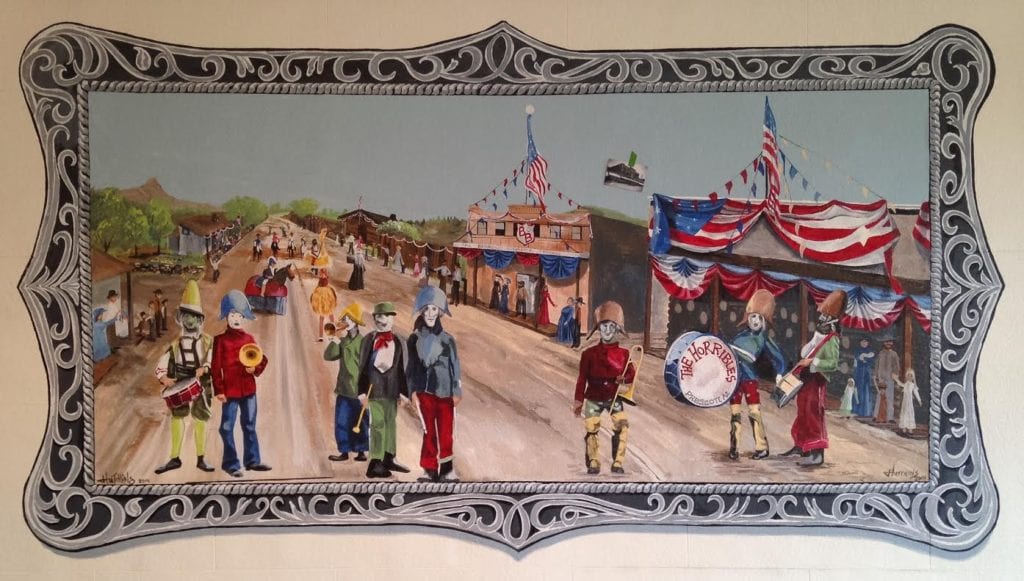 #7, last but not least honors our 19 Hotshot firefighters killed while fighting the Yarnell Fire in 2013.  In the original mural I did on Iron Springs rd., I painted the boys all climbing the tree, the largest Aligator Juniper im the world, the one they saved along with our city just 2 weeks before they perished. I’d turned it into a “Tree of Life” in that mural but it was way in the background and more implied. In this mural, I took that theme, except it is a year plus later. New growth has started (see 19 wildflowers) and it is a tree reverenced by all.

In the shadow of their namesake, ablaze,

they saved our city and this Sentinel tree.

Days later, they gave their lives

To save a neighbor.

Then from the ashes new life springs

And life goes on. 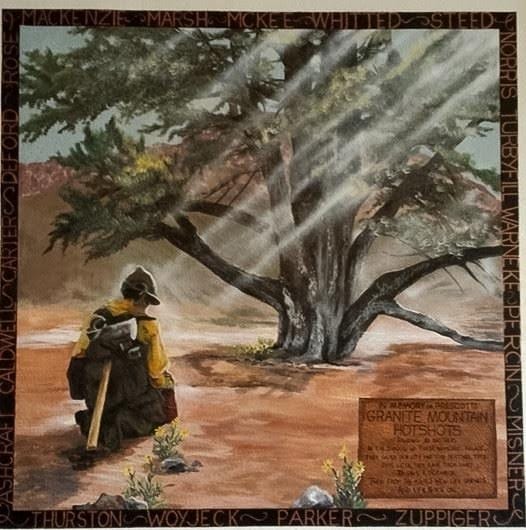 I had a lot of  help on this one. My daughter Kate did the underpainting of Granite mountain and the sky and tree, good friend Jenn Winters-Ashcraft, now married to Andrew Ashcraft’s (one of the 19) dad Tom) did the lettering of all the firefighters’ names on the “frame”, and Kate and my friend Brian did the underpainting for the kneeling firefighter.  Also, the poem was written by one of the men who works downstairs.   This was such an honor to do and Everyone wanted to be part of it. I love them for it.