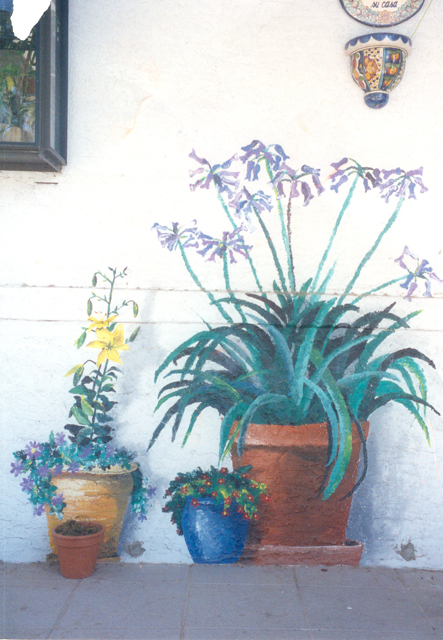 This first mural was one I did on my own house.  My daughter and I were out digging up the latest crop of burned plants we had attempted to plant in hellish Phoenix.  Sweet Katie said  in her cute little voice, “you know Mommy, we can’t grow them, but we CAN paint them!”…an idea was born!   We got out our paints, a few old magazines with some cool reference photos in them and this is what we came up with!  We lived on a quasi-busy street.  It attracted a lot of lookers!  We had more cars cruise by our house really slow!  One was a homebuilder out of Cave Creek who I ended up getting a lot of work from, some really great murals that I wish I had photographed…eh.

But the other thing I did with this was paint a bunch of home murals for those poor souls who live in those white houses with red tile roofs in seas of white houses with red tile roofs…AKA HOMEOWNER’S ASSOCIATIONS FROM HELL!  One such person had recently planted some beautiful flowers in her front yard only to have them weed whacked the very next morning without a word by the homeowner’s association gods.  Needless to say, she was pretty mad.  So here was her solution…THERE’S NO MENTION IN THE CC&R’S ABOUT THIS! : 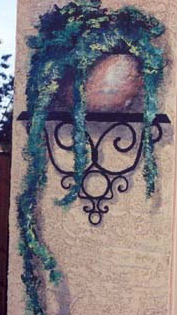 The client told me she had a friend drop his daughter off at her house nearly every day for a month before he realized these weren’t real!    CAN’T WHACK THESE!!!   (oh and also you don’t have to water them either!)