So the first 3 days of this mural were spent sketching!   LOTS AND LOTS OF LITTLE DETAILS that must be exact!  It’s an Indian Chief 1953 with James Dean sitting on it.   Now since JD’s Indian was a 500 and not a Chief, I needed to do some fancy photography and fitting stuff together.   Motorcycle. check.  JD’s face, check.  JD’s body sitting on said Chief, not so check.  SO I went hunting for a JD double who happens to be wearing excruciatingly tight jeans and either an equally tight white T or a black leather jacket.  So I went on a man hunt.   He needed to be short and slender but not skinny.  Lots of skinny dudes out there.  Most, too skinny.  Especially the arms.  JD’s arms looked like he might have worked in a gas station donning a wrench.  And his shoulders were square.  6 pack abs.   So I walked down Whiskey Row where all the biker bars were.  (eh)    I found a biker just climbing on his motorcycle, stopped him and told him what I was doing and what I needed.  I was beyond embarrassment…I needed his body and I needed it today! (don’t worry, I didn’t really say that. I just thought it) I wanted to start painting tomorrow!   He laughed.  And said yeah.   So I had my other references with me, lined his bike up like the Indian (he had a harley…I’d have to be careful) and sat on the street to get my angle and got my shots.

They were pretty much perfect except for ONE THING… 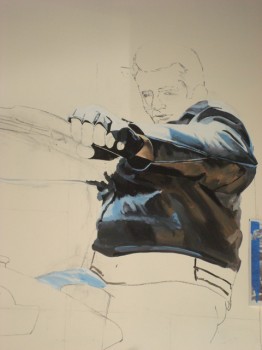 This is up really high.  I have my scaffold on nearly the top rung and I’m standing.  It’s hard for old me to get up and down a lot, so I only got down to check stuff twice.  Once after the sleeve and shoulder were done, and then when I was done,  to check his abdomen.   OH NO WAY!!!  Yes, it will elongate once the last part of the jacket is done, but the root beer belly is still there.  I know what is wrong.  The lights on the belly suggest roundness.  Plus I wlll need to cut him a slimmer shape there in front.

I WISH IT WERE THAT EASY FOR ME TO LOOSE MY OWN ROOT BEER BELLY!

Anyway, it will actually be better, cause the seat on the Harley my model was sitting on is different than the Indian seat and his legs were not exactally right.  I will be able to remedy that if he is not so wide.

Anyway, here’s what I have so far.  I just HAD to paint some of the motorcycle… 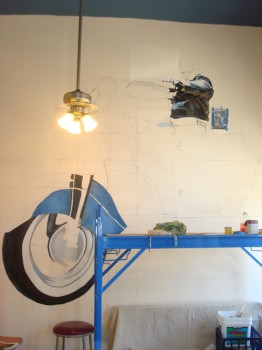 I came in the next day and gave James Dean a tummy tuck and finished the jacket…looks good now!  But then to my horror, I realized the back wheel of the motorcycle was completely off!  When I looked at my reference, the top of the back wheel was at the same level as the gas tank, but not on my sketch!  OH MAN.  It was an entire 12″ off!  So I raised it 6″.  It was okay but still didn’t fit other stuff.  I knew if I tried to paint it as it was, things would be off.  It HAD to be perfect or close to it.  The prob was melding the picture I had of the bike, which had to be perfect, with the pic I took of JD’s body.  That I could tweek a little, but not too much.  So after much sketching, going back to check my perspective, then resketching several times…not an easy task as I had to keep hopping up and down from my 6′ scaffold which for an old broad like me is not an easy thing.  Finally it was correct…or at least as correct as it could be.  I knew nobody would know any slight imperfections but me so I guess that’s okay.  I proceeded to paint more of JD’s body and also the back wheel and if I may say, it was looking pretty good!  Check it out! 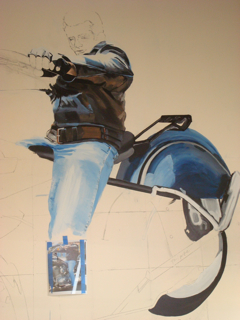 And then the next day, friend Elaine was gonna come over to play for a while so I did just a small thing…but of course an important thing.  James’ head and hands!  Here’s what I came up with.  Elaine took the pic so it was shot from the side.  I’ll get a full front view tomorrow.  The coolest part of it is that no matter where you sit in the resturaunt, JD is looking at with you! 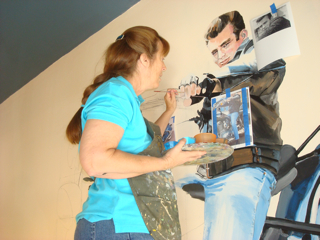 DAY 5….Getting in lots of detail and numb feet 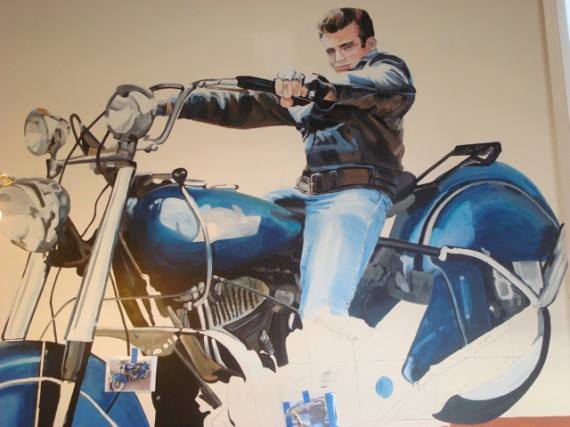 Not James Dean’s numb feet…he doesn’t have any yet.  Mine.  This scaffold feels crazy high.  I just have to forget that I’m dangerously up in the air, and stay in one place…don’t rock the boat too much and certainly don’t look down!  What I want to know is how can anyone be as tall as me and be afraid of heights?  Probably because if I fell and hurt myself, my mural painting days might be over.  I’d hate that.  Once upon a time, I was the sole support of myself and 4 kids with no health insurance.  Being fearful of falling off my scaffold on a windy day was just common sense then.  Now though, my kids are grown and self sufficient, and I have really good health insurance.  Now, if I lost my abiltiy to paint murals I’d just be sad for the loss of the art.  Murals are my fave thing to paint.     Anyway…the painting:

I decided the mural was too blue.  Well, he’s on a blue bike wearing blue jeans and a jacket that reflects blue.  So since in ’53, a torquoise bike was also produced, I got a really pretty aqua and greened up the blue by putting a light watery wash over all the blue paint on the bike.  I also plan to dark blue/ purple up the jeans with brown/orange complimentry colors in the shadows.

The engine is tedious.  I know though that it will be critiqued by all kinds of motorcycleheads, so I must get it right.  My bro Mark was the first…nag.

NOW FOR A WEEKEND BREAK…SEE YA MONDAY!

So I found out too late that the dude who opened this taco stand did so with some chick he met online.  She lives in Scottsdale.  He is slick, sort of an overgrown fratboy, very charismatic.  I though it odd I rarely saw him at the resturant, and when he was, he was just kinda goofing around letting his employees wait on customers and clean and such.  People needed him there and he was not available.  Even his employees did not know his cell phone number.  He rarely showed for appointments with vendors, liked to cruise Whiskey Row on what should have been his busiest nites.   Anyway, the dude stiffed me.

But before he stiffed me on this mural, I suspected things were not well.  I knew that starting a business like this required the owner’s heart and soul and a lot of time and seed money.  This dude put in none of that.

My question was, do I finish this for the sake of the art????  I’d certainly love to!  But I probably wont get paid the rest of what was agreed on.  I only had another day or 2 left!  After talking it over with my husband, it was agreed I should finish it for “art’s sake”.  I did my best until the last day.   My husband got sick and had to be admitted to the hospital in Phoenix.  I came home in the evening and did an all nighter (well, till midnite anyway).  However, my heart was in Phoenix, and my motivation at this point was not so good.  Always, poor motivation=poor art (or anything).  The last part was James Dean’s boot. (Im dispalying my warts here folks, trying to tell it like it is). It is quite horrible I know.  I needed another photo reference and was not going to go the trouble of doing so all considering, so just kind of drew a foot=like thing.   Anyway, look at the (sorta) finished product below,you be the judge.   Regardless, Im glad I finished it.   Now if I can only get my scaffolding and paints back.   sigh.

(Oh I forgot, since I finished at nite, It was not photographable.  I’ll take another shot when I hopefully get my scaffold.  argh.

So some new guys are now in the building with these murals and wants to keep them!  I told the owner of the building that if someone came in and they wanted to keep them, I would come in and finish JD well.  Yesterday I started that work.  I also added a Prescott lamp post, and monday will attach an American flag to that lamp post which will be very cool both for the coolness looks good factor, but artistically it will tie the 2 main murals I did in this place together because the classic car I did on the other wall is red, and the flag will have a lot of red in it…just ties it together.   I’m also painting the new guys’ logo in the back of the store really big which will also tie the murals all together.   The new guy has other plans for more murals here and in their other resturant a few blocks over, but not right now cause THEY’RE ON A BUDGET!   Yay for financially responsible businesspeople!….update:  oh never mind, they decided to go for it and now Im putting a streetscape of Whiskey Row (where they are here in Prescott) on the top wall! 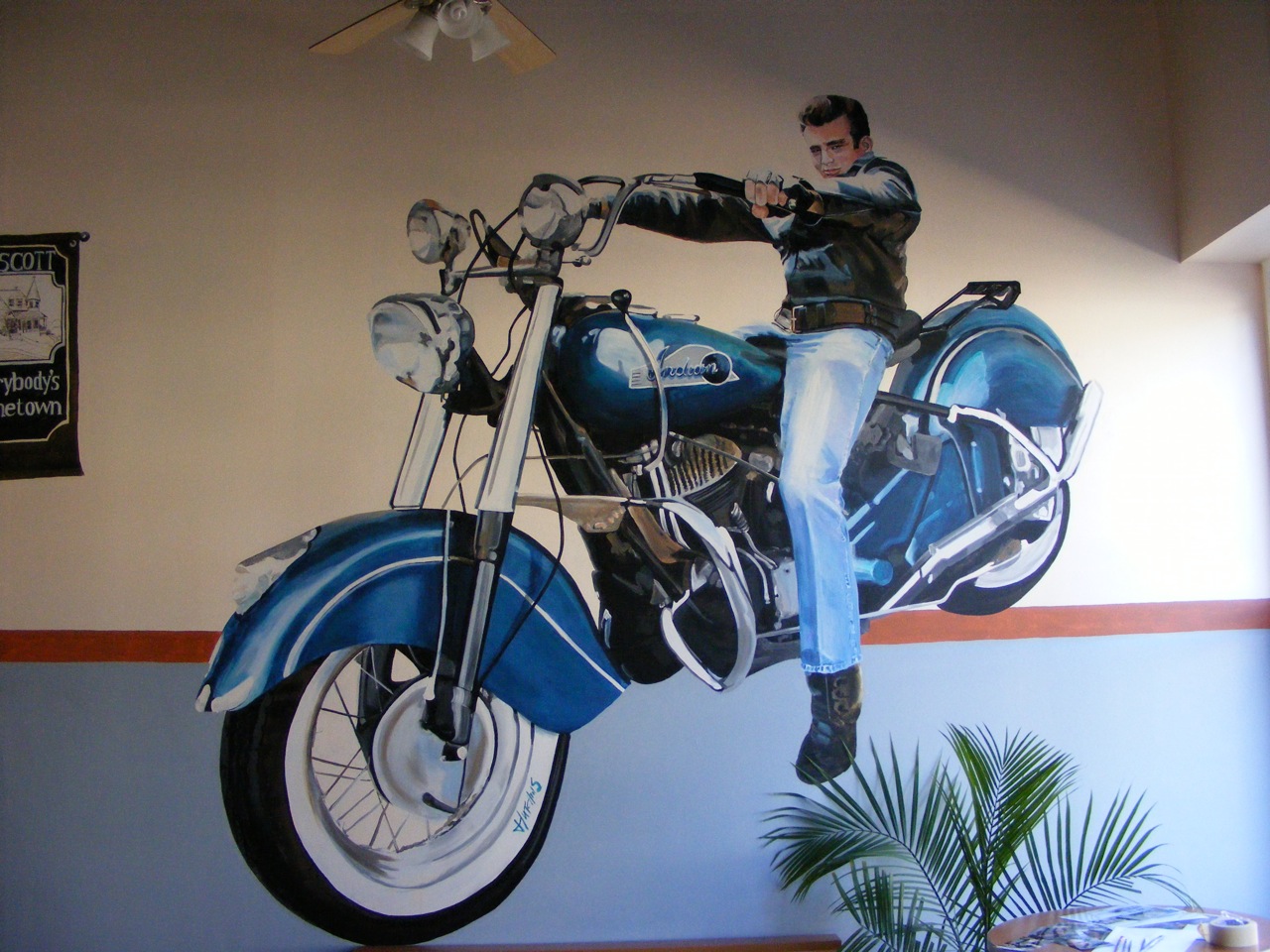 OH AND CHECK OUT THE NEW SCAFFOLD!  No they are not mine, but I feel SO much safer on them and I’m able to relax more on them which is much easier on my poor old muscles!  My next mural I’m schedualed for, the people have some of these too, but I will eventually get my own!  They’re worth their weight in gold![singlepic id=321 w=320 h=240 float=center] 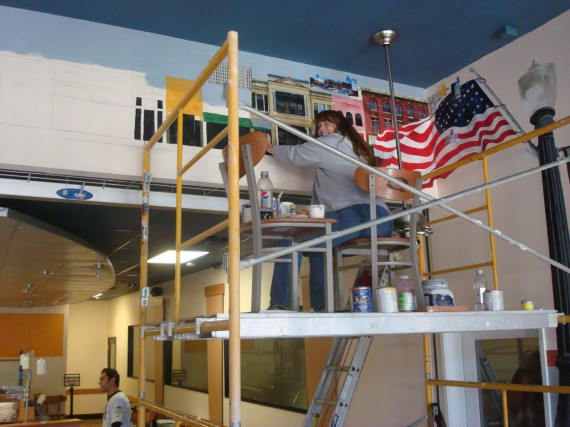 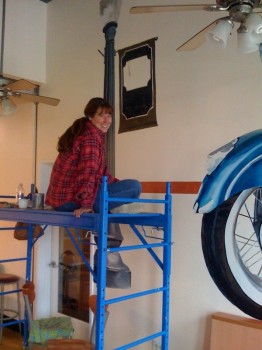