THE SHARE THE ROAD MURAL was inspired by a 1940′-50’s style cartoon which was created in 2003 (ish) called The Triplets of Bellville. Here is the website for the trailer:   http://www.spike.com/video/triplets-of/2477631   just in case you’re interested. Anyway, it is in Prescott on Sheldon and Mt. Vernon at High Gear Bike Shop which is only 2 blocks from my house which of course was pretty fabulous.  I got to use my new scaffold for the first time here.  They were awesome cause in the afternoon when the sun was on my wall, I simply hung shade screens on the top and side of the scaffold and it was perfect!  I just Looooooove my new scaffold, they keep me safe!

[singlepic id=353 w=320 h=240 float=center]This first one is of me on the coolio scaffold.  (Yeah, after seeing this pic, I gave those heinous shorts to my brother).  The next few are different parts of the mural. I like the dog. Reminds me of my dog! This was not the easiest mural to do. The idea of the mural as far as the style goes was to make it a cartoon, then make the deer balls-on real, so that people would see it and want to stop and take pics of the deer that just came in off the hills and is walking in front of the mural. (They do that at the Grand Canyon all the time when I lived there –  tourists just stop their cars in the middle of the road and get out to take a pic of a deer…didn’t matter that there were 20 cars behind them! Anyway, pretty funny).  What was difficult about this mural was to NOT make stuff too real looking. It was a stretch for me, cartooning. 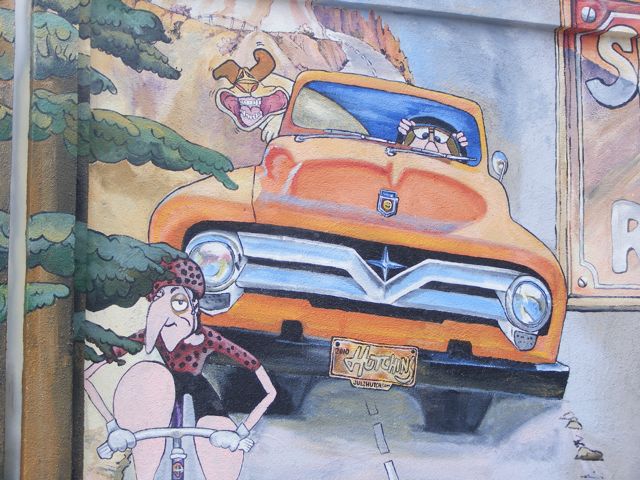 We’ve had some mural problems here in Prescott, having muralists do murals that expressed their own agenda rather than what was assigned and paid for.  I wanted to make this mural PRESCOTT.  I took into consideration first, the architecture and the location of the building. This building was pretty much baboon-butt ugly.  Cement colored, square, with these weird pointy things on them.  I remember this building when I lived here when I was a kid. It was vacant for years. It was important to me to use the architecture and some of the ugly things, like the water spigot, the wires and especially those weird spike things, and disguisie them so they were no longer ugly, but clever incorporations into the mural.  The mural was also to be viewed by cars whizzing by at 35mph, so it needed to be easy to see the elements. Not confusing. 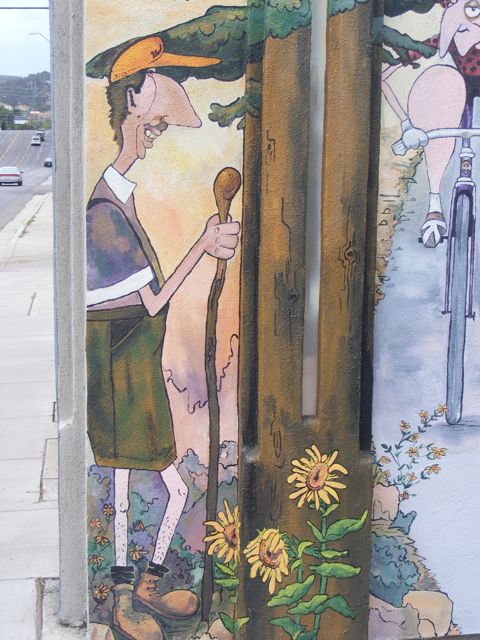 Anyway, the building is in a historic district with the front of the store on Mt. Vernon, one of the most beautiful and well known streets in Prescott.  I took colors of the houses and foliage for my palate.  We chose for the style the 40’s-style cartoon which was good for this old neighborhood. The truck is a local truck. I photographed it at a classic car show a week before I started the mural. 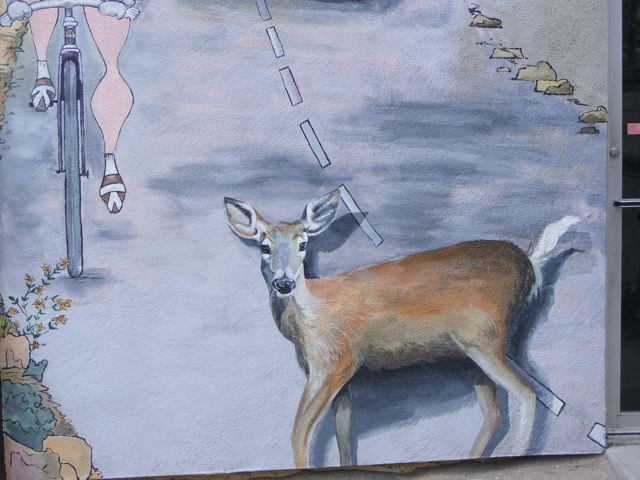 The trees and flowers are local. Ponderosa pine and those pretty sunflower-weeds we see all over the place.  The hills at the top are prescott-like.  The deer is a local.  The people…well they are kinda funny looking. Most people in Prescott don’t have that big of nose, altho there are a couple…maybe!  (haha). Supposedly they are french as in the cartoon, but the hiker could be just about any race. This mural would look odd in Phoenix or LA and that is the way it ought to be.  It IS Prescott.  The mural’s theme is of course “Share the Road”.  The government campaign used to say “Share the road with bicycles”, but we need to share it with anything that belongs (or doesn’t belong) on the road to keep us all safe. Hey, I just started to ride a motorcycle. Please share the road with me too!

And the last one…WALLAH, SHE IS DONE! 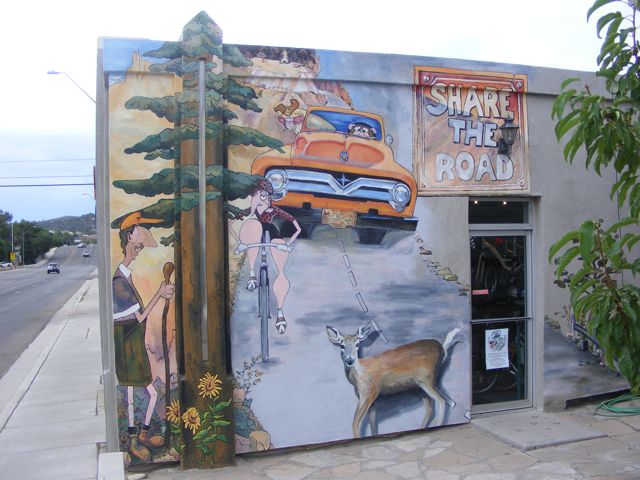